As you probably know, everyone has bacteria in their mouth. Most of it is good, but some of it is bad. So does this mean that brushing your teeth and getting sick are correlated? The truth is, they are closely linked.

Brush and floss your way to better health.

According to the Academy of General Dentistry, more than 90 percent of all systemic conditions produce oral signs and symptoms. Turns out that poor oral hygiene not only increases the likelihood that you’ll get sick from a virus such as the flu or the common cold, but it may put your longterm health at risk as well. In fact, not brushing and flossing thoroughly and regularly has been linked to serious health issues including:

As you can see, practicing good oral health is extremely important to staying healthy in general. Brushing rids your mouth of bad bacteria and combats tooth decay. Flossing protects your gums from diseases such as periodontitis and gingivitis. And doing both could reduce your risk of contracting conditions such as diabetes, dementia, pneumonia, and others! 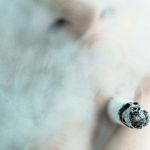 How Smoking Affects Your TeethUncategorized

Is There Such a Thing as Brushing Too Hard?Uncategorized