Tales From The Mouth of the Jungle

Ukarumpa, Papua New Guinea (PNG) – It was a long flight from Port Moresby in the small country just North of Austrailia. We made our final approach towards the patchwork runway in the mountainous region of the Eastern Highlands in Papua New Guinea (PNG).  It was a clay stripperched at 5,000 feet on the edge of the compound where I would spend the next few months. We chartered a Kodiak, an airplane best described as a single engine mini-van in the sky. These planes are designed for short run-ways, and lots of cargo, or in this case, missionaries. The pilot was kind enough to let me fly right-seat, a privilege only allowed co-pilots, or the odd exception; a paying passenger dentist who also happened to carry a private pilot’s license.

It was like a small earthy city high up in the clouds, surrounded by chain link and barbed wire. This was not a prison to keep people in, rather a mountain paradise designed to protect foreign well doers from outside dangers, and tribal scuffles. The homes were made of wood and river rock, and were perfectly manicured by the hands of nationals, using the flowers of the region. They were an eclectic set of houses as different as the people who built them.  Aussies had BBQ pits, the Finnish made their own saunas, and everyone had rain collectors; the only source of potable water. 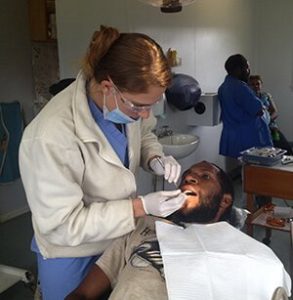 The medical/dental clinic was top notch, despite it’s open air construction that made us feel as if we were outdoors. The open windows let in the sun and Mountain Views. The soundtrack of birds, and the cool air were like a blanket of welcomed peace.  Tuesdays and Thursdays I saw Nationals as patients, the indigenous people from different tribes in the region. On other days, I was there to serve the thousand-odd expats who were there for their own purposes; linguists, programmers, language specialists, tribal liaisons and the families that came with them. They were some of the smartest people I ever met.

It was a haven in the clouds; people from every tribe and nation, living together doing different work designed for the same ultimate purpose; to provide a written language to the surrounding tribes, with the ultimate goal of presenting them a bible in their own language.

In my travels, I have learned there are places in the world where it is important to do things “old school.” In PNG, this meant gold fillings and crowns, which required a trip to the local market, then smelting the gold to pour in a mold. One part dentist, one part metallurgist, I saw a lot of gold toothed smiles.

I will never forget the challenges or the rewards that came from these travels. Now at my current practice I have amazing tools at my fingertips. I can diagnose and deliver a crown on the same day. I can implant a tooth where once there was a hole. It is immensely satisfying to see a patient’s healthy smile, the result of good work.  Still; the memory of that little paradise in PNG will always be with me.